Above: The Start Up Drinks Lab Co-Founders, Hannah Fisher and Craig Strachan

The Start-Up Drinks Lab, which was founded last year by Hannah Fisher and Craig Strachan has taken an undisclosed six figure investment from Scotmid Co-operative. The firm will specialise in contract manufacturing specifically for craft sodas with the business officially opening its doors in May with a new production facility in Kelburn Business Park, Port Glasgow.

Riverside Inverclyde (ri), the organisation charged with delivering the economic redevelopment of  Inverclyde in the West of Scotland, has concluded an agreement with international fashion and lifestyle brand, Joules on a three year lease of 1,578 sq ft of space from 1 January 2018 at Greenock’s recently refurbished Custom House.

A plan to extend The Exchange restaurant and bar bistro in Greenock has been rejected by Inverclyde Council planners. The eaterie in Tobago Street wanted to build a ground floor extension into a yard area at the side of the premises. The extra space was to have been used to create a dedicated bar.

Will 2018 Be Plain Sailing For The Clyde Shipyards?

BAE’s future on the Clyde currently rests on the successful completion of Type 26 frigate contract, described as “the UK’s core shipbuilding programme for the next 18 years”. Eight vessels are planned - but only contracts for the first three have been signed off, in a deal worth £3.7 billion. Early work on HMS Glasgow, the first of the Type 26s, is currently progressing at Govan. Securing a future deal for the remaining five vessels is a key priority for BAE.

Above: Speaker Russell Dalgleish at the Iconic Custom House

A Scottish Business Network (SBN) speaker event at the newly refurbished Custom House by regeneration company Riverside Inverclyde was a fantastic success, attended by over 30 businesses on Thursday 11 January 2018.

Our Place Our Future, a local initiative to empower communities, has received funding of £30,682 from the European Social Fund, to seek the views of people across Greenock East and Central and encourage their participation in positive changes within their local area.

Inverclyde Counci is set to spend £600,000 on urgent repairs to Port Glasgow's oldest building. The King George VI building in King Street needs a new roof to keep it wind and watertight, as well as immediate electrical work.

Riverside Inverclyde (ri) has announced ABC4D as its newest tenant at Ladyburn Business centre. ABC4D is Scotland's largest independent baby scan company and is opening a new state of the art baby scan clinic in Greenock. The new facility will offer weekend and evening appointments for a range of baby scan packages, fertility scans and NIPT Harmony tests.

New £500k Pharmacy In Larkfield On The Way

Work is now underway on a new £500,000 health and retail development in Larkfield. Long serving pharmacists AC Still are investing in new premises in Burns Square, on the site of the former Elizabeth Martin Clinic. 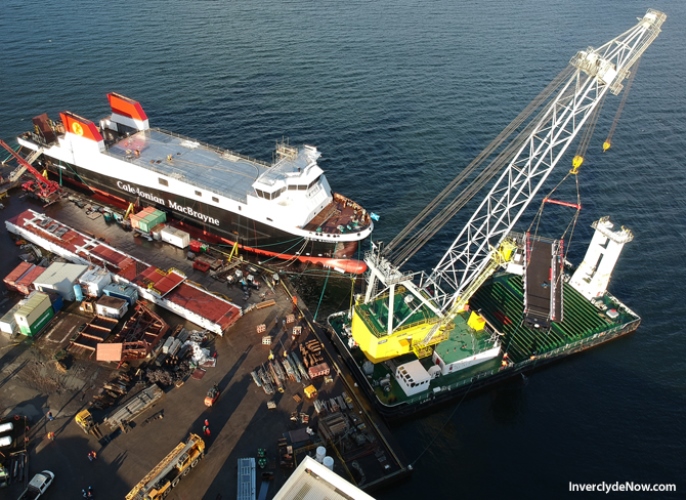 Above: The new Linkspan at Gourock Ferry Terminal being lifted into place. Picture courtesy of Inverclyde Now.

A huge floating crane this afternoon lifted the linkspan into place at the ferry berthing facility at McInroy's Point, Gourock. The vessel Lara collected the 30-metre structure from Ferguson Marine Engineering, Port Glasgow, where it had been fabricated, and headed down the Clyde for the lifting operation.

End Of An Era As AdLib Music Shop Closes Its Doors

A popular businessman shut up shop for the last time — with a farewell fanfare from grateful musicians. Joe Baldi has run AdLib for almost 40 years, selling instruments and sheet music and inspiring a new generation of performers.

Estate agency McArthur Scott has applied to to change the former Food Express premises at 25 Brougham Street, Greenock from retail to office use. The proposal is pending consideration by Inverclyde Council.

Now entering its 15th year, the Inverclyde Chamber of Commerce Bee’s Knees Awards is once again throwing the spotlight on local business talent with a new line up of categories for 2018. This year’s free launch event is being sponsored by West Coast Cinemas and will take place at its Waterfront Cinema Greenock on Thursday 25 January, noon to 2pm.

A jobs fair is being held in Port Glasgow on Tuesday 30 January. Representatives from various companies and organisations are expected to take part including McGill's Buses, Cruden Homes, Concentrix, River Clyde Homes and Royal Bank of Scotland.

Tesco have applied for planning permission to install a new jet wash facility at their petrol filling station in Port Glasgow.

Permission Given For Pet Crematorium

A plan for a pet crematorium at a farm in Port Glasgow has been approved by Inverclyde Council. The application, made by Animal Angels Inverclyde Ltd, relates to part of a building used as an equipment store at Parkhill Farm, Old Greenock Road.

Riverside Inverclyde takes no responsibility for the content of the sites listed or the content of sites which may link to them. If you have a business related story you would like to share to this weekly update, please send this to: info@riversideinverclyde.com.