Poonam Gupta, chief executive of Inverclyde-based PG Paper, was crowned EY Entrepreneur of the Year 2019 for Scotland. The entrepreneur, who received the accolade at the V&A in Dundee, was praised for her resilience and determination in building PG up into a £36 million turnover company.

Link Housing Association have successfully argued that the requirement to bring it up to scratch beforehand would mean a major delay in the construction of the new social houses. Now the planning board has granted them permission to upgrade the bridge, which is to be adopted by Inverclyde Council, at the same time as building the homes.

Council Looks To Sell Land In Gourock For Housing

Inverclyde Council has started consultation over a proposal to sell land at Kirn Drive, Gourock to a developer. The prospective purchaser intends to use the two sites for housing. The land involved is the former sports pitch site and grassed area near the community centre and a triangular site beside Moorfoot School.

Louise Hunter worked for the Financial Times in London for 18 years before setting up her own events company Summerhouse Media and more recently as co-founder of Creative Inverclyde. Louise has organised conferences and events all over the world and briefed President Clinton at a charitable event in London in 2015.

View all of the winners from Inverclyde Chamber of Commerce's Bee's Knees Awards which were held on Friday 7 June 2019 at The Chartroom at Kip Marina in Inverkip.

A study by the TaxPayers' Alliance (TPA) revealed the district had the second highest spend in Scotland on non-residential properties such as shops, pubs, office blocks and even schools. Between January 2016 and December 2017, the council forked out £6.3m on a variety of premises across Inverclyde with the figure including money spent on insurance, security and maintenance costs for empty local authority-owned buildings.

Board Members Of River Clyde Homes Have Been Branded 'Puppets'

Board members of River Clyde Homes have been branded 'puppets' over its controversial plans to transfer repairs staff to a subsidiary company. Councillor Colin Jackson says approximately 50 workers could be left working as far afield as Ayrshire and Lanarkshire if the merger - which is the subject of a strike ballot by staff - goes ahead.

Ladies Dressed To Impress To Raise Thousands For The Hospice

Fizz and fun was the order of the day at The Chartroom at Kip Marina as glamorous guests gathered for the annual hospice's Ladies Day. The glittering event raised over £24,000 - which could fund 41 nights of specialist in-patient care and support for a patient diagnosed with a life limiting illness.

Above: Oak Tree Housing, who have given various grassroots groups a huge cash boost of £37,000 (Photo Credit: Greenock Telegraph)

A series of grassroots groups have received a big cash boost in a £37,000 cash injection from Oak Tree Housing. The association has handed out cash to 11 health, wellbeing and youth initiatives through its Our Community Our Future Fund.

Public Asked For Views On Scrapping Parking Discs In Gourock

Inverclyde Council agreed to seek the view of residents and visitors after complaints that the parking discs are not suitable for the town. Current parking time restrictions would remain in place - streets such as Kempock Street and Kempock Place would still have a one-hour limit and Lower Kempock Street would keep its three-hour limit.

Permission is being sought for a Timpson kiosk outside Tesco, Dalrymple Street, Greenock. The kiosk, near the main pedestrain entrance, would offer shoe repair, key cutting, jewellery and watch repairs, engraving, and dry cleaning drop-off and collection.

A pub boss was given a knock-back to open just one hour longer as officials vowed to clamp down on late-night bars in Greenock. The landlord of the Hole in the Wa' asked for permission to stay open for an extra 60 minutes until 1am on a Sunday night in a bid to help boost business and prevent the loss of customers to other town centre premises.

St Mary’s Primary, Greenock was highly commended for its School Reading Journey challenge and is one of just 20 honoured in this year's Minister’s Reading Challenge, out of hundreds that took part from across Scotland.

Fenwick 47 has applied to Inverclyde Council’s licensing board for permission to introduce outdoor seating in West Blackhall Street in a big to put tables and chairs outside and serve customers food and drink.

Planners have agreed that a former Greenock hairdressing salon can be used as a residence. Inverclyde officials have given permission for the property at 1 Grieve Road to be returned to residential use - it is part of a bungalow that was sub-divided.

Planners are being asked to approve a proposal to demolish the Kilmacolm Squash Club building, Bridge Of Weir Road at Porterfield Road, and replace it with a three-bedroom house.

Above: The Morton Club Together group are looking to go ahead with their Fan Ownership Scheme (Photo Credit: Greenock Telegraph)

Morton Fan Ownership Scheme Will Go Ahead Even If Ambitious £400,000 Target Not Met

The Morton Club Together group currently have over 300 pledges totalling £125k with the June 21 deadline looming for supporters to sign up to the initiative. But founder Graham McLennan says they will carry on regardless of the final total in a bid to boost Ton manager David Hopkin's transfer kitty.

Dr Gerry McCarthy Recognised At Bee's Knees Awards and 19 others...

Enjoy afternoon tea at the Great Inverclyde Get Together with CVS Inverclyde. The Great Get Together was set up in memory of Jo Cox MP, who was killed on 16 June 2016 as an opportunity to celebrate all that unites people. 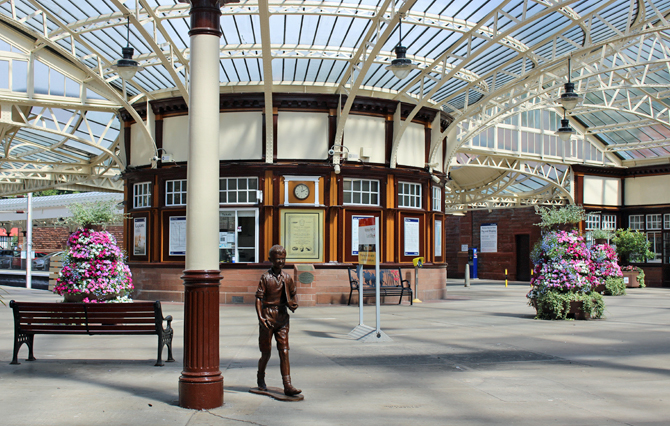 The Friends of Wemyss Bay Station are marking their 10th anniversary with an open day at the station on Saturday 22 June. Organisations providing displays at the event include ScotRail, Caledonian MacBrayne, Royal National Lifeboat Institution and Visit Scotland, together with a variety of local groups.

St John's Church in Gourock is organising a launch event to promote its heritage project and tower repair works which are to get underway soon. The church is encouraging members, adherents and the wider community to support this event and also to become involved in the volunteering opportunities which its heritage project creates.

Riverside Inverclyde takes no responsibility for the content of the external sites listed or the content of sites which may link to them. If you have a business related story you would like to share to this weekly update, please send this to info@riversideinverclyde.com.