Above: The Spango Valley site in Greenock which has recently been sold to McGill's owners Sandy and James Easdale (photo courtesy of Greenock Telegraph)

McGill's owners Sandy and James Easdale have bought the former IBM site in Greenock for £1.57 million. The brothers snapped up the 70-acre Spango Valley site at auction for three-times the reserve price. The sprawling plot of land, renamed Valley Park, was put on the market by former owners Canmoor for £500,000.

Shipyard To Launch Claim Against Ferry Firm Amid Design Row

Ferguson Marine Engineering is set to launch a legal action against the Scottish government's ferry company over its £97m contract to build two new ferries.

Scotland Food & Drink launched its Home Advantage publication at its ‘Gastronomy Economy’ Conference in Glasgow on 29 November 2018. The ambition is to double Scotland’s turnover in Scotland and the rest of the UK from £8.6bn to £17bn by 2030.

Above: The winners from Scottish EDGE 13

Owner Fraser Gordon started the business in August 2015 with the goal of manufacturing industrial chemicals, individually advanced nanotechnology coatings and formulas to be used in the automotive sector. In 2016 ‘Wowo’s’ was launched and moved to Riverside Inverclyde's Kelburn Business Park earlier this year as part of the ongoing expansion of the business.

Care Provider Pulls Out Of Inverclyde

National care company Allied Healthcare, who have hit financial difficulties, have now cancelled all contracts following a warning from care regulators. Inverclyde Council has stepped in to put alternative plans in place for all those affected and say they hope to avoid any major disruptions to care.

Taste Inverclyde is delighted to share the first images of the renovated Albert Guest House following a six-figure investment. The premises have been given a new lease of life after being bought at an auction in November 2016.

Above: Owners Jude and Hazel Boulton who plan to create a new resturant within the former Bank of Scotland premises in Kempock Street, Gourock

Plans have been revealed for a new £100,000 restaurant in Gourock that will create a string of new jobs. Jude Boulton and his wife Hazel are opening 'KAI Smokehouse' within the former Bank of Scotland premises in Kempock Street in January 2019.

Kilmacolm Schoolboy's NASA Trip Is Out Of This World

Two dozen young Inverclyde performers are treading the boards alongside stars of hit TV show Still Game in the Greenock pantomime which started on 7 December. 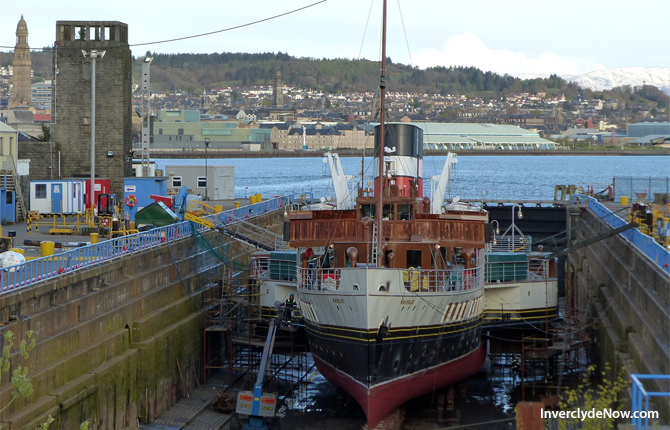 Above: Garvel Dry Dock in Greenock

Dales Marine wants to use its dry dock at Garvel, Greenock for breaking up ships. The ship repair company has asked planners at Inverclyde Council to confirm that it can go ahead and bid for contracts to dismantle vessels at the site.

Inverclyde’s A Spoonful Of Sugar is celebrating awards success at the Scottish Renfrewshire Business Awards on a fantastic night for Inverclyde food and drink businesses with The Exchange and One Cove Road also picking up awards.

Grass Is Greener For Residents After Improvement Works

Overgrown trees and bushes which were encroaching onto the roads and footpaths have been cut back while stairs and paths have been power washed and grass has been cut in the area around Jura Street, Gael Street and Rose Street by River Clyde Homes.

Motorists face extra disruption as closure of a major route through Greenock continues. Baker Street remains shut between Drumfrochar Road and Ingleston Street while road realignment work is carried out.

No Hollywood Ending For Anna and The Apocalypse School

The production crew for the film was based at the former St Stephen's High School in Southfield Avenue for a number of weeks at the start of 2017 with key scenes shot there. The movie's general release has coincided with demolition of the building by Inverclyde Council.

Above:  The Officers Club, located in the Oak Mall Shopping Centre, suddenly closed its doors on Wednesday.

Staff at a Greenock clothes shop were given the shock news that they were losing their jobs on the day the store they worked in was axed. The Officers Club, located in the Oak Mall Shopping Centre, suddenly closed its doors on Wednesday.

Festive Evenings With One Cove Road

One Cove Road has joined the Christmas festive offering for the first time with an exceptional menu. Due to the popularity of their summertime evening openings and by popular demand, One Cove Road is now opening to offer a festive evening menu on Thursday’s, Friday’s and Saturday’s.

VisitScotland has released the Q3 results of its recent survey on tourism business performance across Inverclyde, Renfrewshire and East Renfrewshire as well as Scotland as a whole. The survey covers the period from July to September 2018.

Above: An Artists impression of a potential new housing development in Kilmacolm which has been submitted for planning permission by Taylor Wimpey

An application for planning permission in principle for new private and affordable homes in Kilmacolm has been submitted by Taylor Wimpey West Scotland.

Both Pottery Street (Greenock) and Kirn Drive (Gourock) recycling centres will be open over the festive period with the exception of Christmas Day and 1st & 2nd January.

Developers Hope To Start Work On Housing At Ravenscraig Hospital In May 2019 and 16 others...